We love our walkers at Windy City Paws, and this month we want to introduce you to Rigby, who has been with us for over a year! 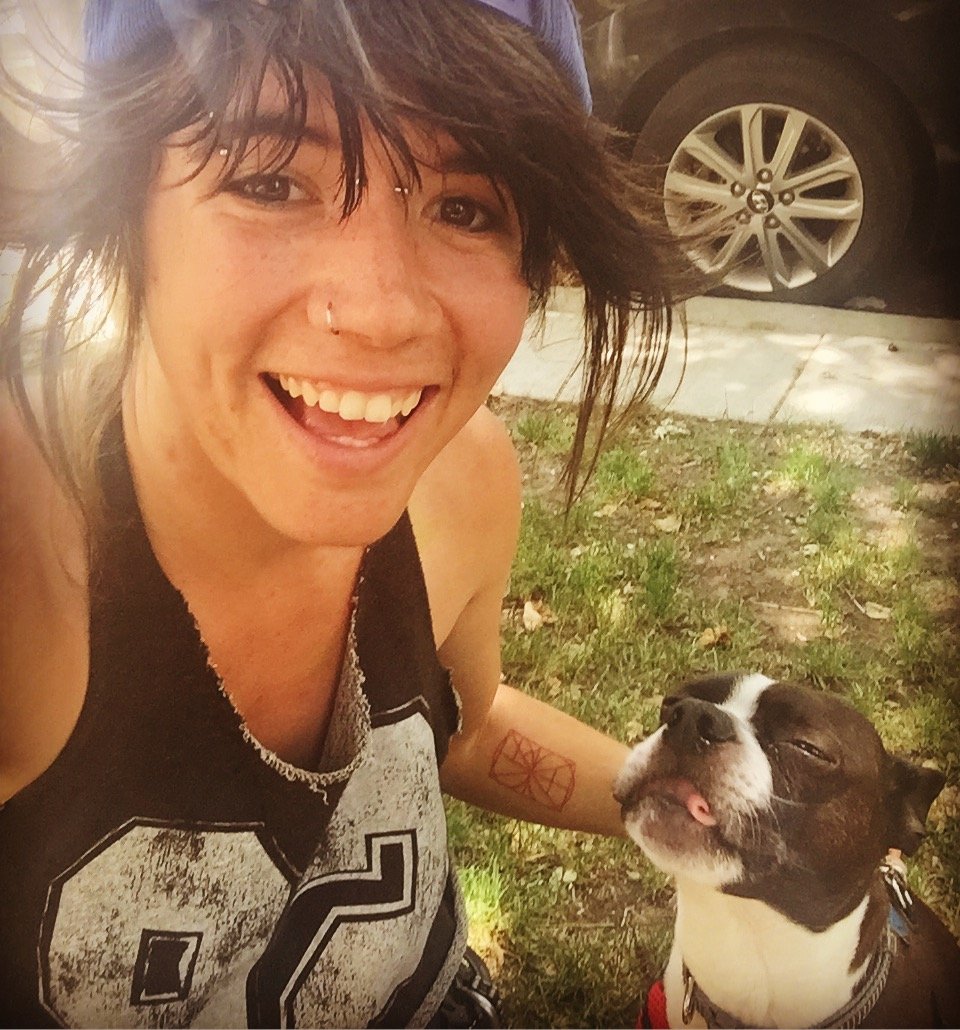 Where are you from?
Olympia Fields, a suburb south of the city.

How did you end up in Chicago?
Basically, all of my friends graduated and moved to the city en masse. It seemed like the most logical step for me, too.

What is your favorite pastime?
I spend a lot of time listening to and thinking about music. I play bass guitar in a two piece. We’ve traveled a little bit, and we have played in basements, bars, public parks, living rooms, art gallery porches, etc. It’s been pretty fun.

What is your hidden talent?
I can fold an origami crane with my eyes closed.

Do you have pets? If so, what kind and what are their names? Tell us about their personalities.
A few weeks ago, I saw a little white mouse sitting beside a bike path! I scooped him up and brought him home. I have since named him Tony Hawk. He  is extremely friendly and adventurous. My housemates are also animal people, so I get to live with a black cat named Isosceles, and a cattle dog mix named Willow!

If you were a dog, what breed would you be and why?
Boxer. There is no doubt in my mind. I’m goofy, friendly, mouthy. I have big feet. I have too much energy and I’m always running off to the next thing. I’m surprisingly muscular.

If dogs could run for public office, which breed do you think would make the best president?
I would select a wise old mutt who’d seen it all already.

Why did you decide to become a dog walker?
I had been working jobs that required me to stand inside and in one place. So I desperately needed sunshine and exercise. Most importantly, I’ve always been dog-obsessed, and I have been taking care of other people’s pups since childhood. It was inevitable.

What’s the weirdest thing about being a dog walker?
Sometimes, people know the dog, but they don’t know me? So they’ll walk up, have a long conversation with the dog, and then walk away without saying a single word to me. It’s pretty awkward, but I can’t say that I haven’t done the same thing to people.

What would people never guess is part of your job as a dog walker?
I get to watch my client’s babies grow up! In the year that I’ve been walking, I’ve watched babies go from newborn to toddler. So cute. I’m the youngest in my family, so this is all new and exciting for me.

What is your biggest pet peeve while walking dogs?
When I run into people who somehow think that it is acceptable to walk their dogs off-leash! It’s the city of Chicago, for pete’s sake, that’s just irresponsible!

What’s the best part about being a dog walker?
I feel like a proud grandparent a lot of the time, and it’s great! I love to show off pictures of my dogs, and I’m always bragging about them to people.

Thank you so much for all of your hard work, Rigby! If you would like to learn more about Rigby and our other walkers, visit our walker page!